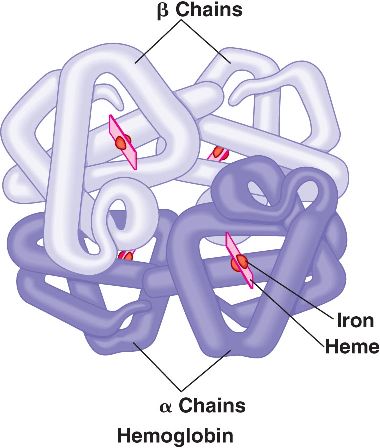 Hemoglobin is the protein molecule in red blood cells that carries oxygen from the lungs to the body’s tissues and returns carbon dioxide from the tissues back to the lungs.

Each globulin chain contains an important iron-containing porphyrin compound termed heme. Embedded within the heme compound is an iron atom that is vital in transporting oxygen and carbon dioxide in our blood. The iron contained in hemoglobin is also responsible for the red color of blood.

Haemoglobin levels vary from person to person. Men usually have higher levels than women. A haemoglobin “cut-off” level is set for blood donation to ensure that your haemoglobin will not drop below normal after you have donated blood. Normal ranges for haemoglobin differ between ethnic populations, and males and females, and are also affected by age, especially in women. Individuals with haemoglobin levels below the normal range are, by definition, anaemic. There are many causes of anaemia and anaemia due to iron deficiency is common.

Myoglobin is a small, monomeric protein which serves as an intracellular oxygen storage site. It is found in abundance in the skeletal muscle of vertebrates, and is responsible for the characteristic red color of muscle tissue. It traps oxygen within muscle cells, allowing the cells to produce the energy required for muscles to contract.

High concentrations of myoglobin in muscle cells allow organisms to hold their breath for a longer period of time. Diving mammals such as whales and seals have muscles with particularly high abundance of myoglobin.

When heart or skeletal muscle is injured, myoglobin is released into the blood. Elevated levels can be measured within a few hours following an injury.

There is a close chemical similarity between myoglobin and hemoglobin, the oxygen-binding protein of red blood cells. Both proteins contain a molecular constituent called heme, which enables them to combine reversibly with oxygen. The heme group, which contains iron, imparts a red-brown colour to the proteins. The bond between oxygen and hemoglobin is more complex than that between oxygen and myoglobin and accounts for the dual ability hemoglobin has to transport oxygen as well as to store it.

In contact with venous blood, oxygen combines more readily with myoglobin than it does with hemoglobin, favouring the transfer of oxygen from blood to muscle cells. Thus, the oxygen that the working muscle requires for the energy-producing biochemical reactions is provided.

Differences Between Hemoglobin And Myoglobin In Tabular Form

Similarities Between Hemoglobin And Myoglobin